ISO 18 will be held in Santa Barbara 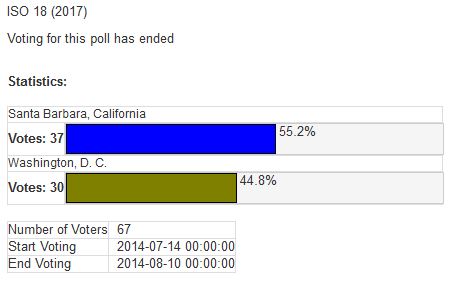 he next International Symposium on Ostracoda will be held in Santa Barabara, California, USAmerica.

During the last business meeting of IRGO in Rome, our dear colleagues Todd Oakley (University of California Santa Barbara) and Gene Hunt (Smithsonian Institution, Washington D.C.) offered to host the next ISO in 2017. We thank Gene hunt for his invitation. We will keep Washington, D.C. in mind for one of the future ISOs.

55.2% of the voters decided that Santa Barbara has better options to host the ISO 18 in 2017. We are looking forward to travelling to California. May be some of us will take the opportunity to stop over at the Smithsonian Institution in Washington D.C. after all.

The winners of this year's Sylvester Bradley Awards

Poster presentation (sponsored by IRGO): Josep Antoni Aguilar-Alberola et al. (The hatching process in Cyprididae ostracods: morphology and function of the A-9 stage)

- Ilaria Mazzini et al. (The “elephants” and the ostracods: a 7 My old tale from the United Arab Emirates)

It was a very pleasant gathering and we have agreed to meet again in China in 2016. More information and announcement will follow shortly from the Chinese colleagues. Please, remember, this meeting is for all ostracodologists working on Asian ostracods, but everyone else is always welcome to join.

17th International Symposium on Ostracoda “Back to the future” University of Roma 3, Rome (Italy) 22nd-26th July, 2013

The International Symposium on Ostracoda (ISO) is a meeting that features research on both living and fossil Ostracoda. It takes place every four years, each time in a different location. The 17th Symposium took place in Rome (Italy) and was hosted by the University of Roma 3. It was also an opportunity to celebrate 50 years from the first ISO meeting, which took place at the Zoological Station in Naples (Italy) in 1963. For this reason, the motto of ISO17th was “Back to the future” further developed in “Evolution of concepts and methods in ostracodology during the last 50 years”.

Already in 1965, the German National Youth Research Competition has been initiated by Henri Nannen, a famous journalist and editor, and has meanwhile turned into a flagship initiative of the German Ministry for Education and Research.

Every year, young people up to the age of 21 present their research projects before a jury of scientists from universities and industry, hoping to receive one of the attractive prizes. The competition covers the disciplines Biology, Chemistry, Physics, Engineering, Geosciences and Working Environment. After a number of regional competitions, the winners are sent to the national finals, which take place under the patronage of the German President.

Christopher Gemeinhardt (18), pupil of a secondary school in Schleiz (Thuringia) had won the regional competition with an ostracod project under the guidance of Peter Frenzel (University of Jena) early this year. Christopher investigated a system of ponds in his home area and showed that ostracods indicate the degree of utilisation for fish farming. His results have implications for using ostracods in nature conservation monitoring and for archaeology tracing phases of intensive fish farming in medieval times. Christopher’s paper is already published in Mauritiana, the journal of the Museum Mauritianum in Altenburg, Thuringia.

On June, 1st, the national competition took place in Künzelsau, of course with Christopher and his presentation on the ostracods project. The jury showed themselves impressed and awarded him the honourable third prize in the field of geosciences and spatial sciences! Congratulations to the presumably youngest ostracodologist in our community!